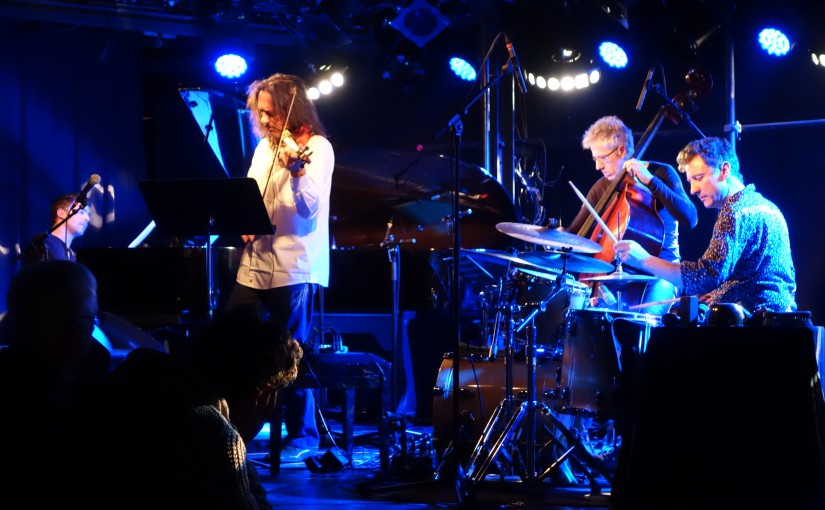 Last year ECM issued Time Before And Time After, Dominique Pifarély’s richly creative solo recital. Now comes Tracé provisoire, a bracing quartet album, which provides a marvellous context for the wider range of the French violinist’s expression. Pifarély, as long-time followers are aware, is a musician who thrives in the unstable territory between improvisation and composition, and his pieces here establish ideas, structural elements and themes which encourage textural, lyrical and abstract improvising to develop in the moment. The interplay amongst the players is dynamic, exploratory and engaging, inspiring Dominique to fine and differentiated soloing. If the line-up of violin, piano, bass and drums appears more ‘jazz-like’ than some of Pifarély’s earlier ensembles, appearances can be deceptive. Jazz is certainly part of the story, but the band scarcely stays in one place long enough to be pigeonholed. The free movement of energy is central to the music, which incorporates group improvising, luminous counterpoint, intense inner pulsations and open, lyrical expanses.

This quartet was founded in the spring of 2014, but Pifarély, bassist Bruno Chevillon and drummer François Merville have been regularly crossing each other’s musical paths for a few decades. The violinist and bassist can be heard together, for instance, on Louis Sclavis’s album Chine, recorded 1987. Chevillon was on board when Pifarély and Sclavis recorded their Acoustic Quartet album for ECM in 1993. Dominique and François Merville played together with Sclavis on the Dans La Nuit project, with music for the silent movie by Charles Vanel (recorded in 2000). Dominique and Bruno played in the French-American quartet Out Of Joint with Tim Berne and Craig Taborn in 2009. The list of cross references goes on and on. Pifarély, Chevillon and Merville are cornerstone players of improvised music in France and they’ve brought new impulses to it, other ways of thinking about freedom and form.

Dominique’s approach to improvising incorporates an awareness of soloistic possibilities for his instrument reaching back to Bach and beyond, even as he perpetually searches for fresh contemporary possibilities, and “discontinuous canons and strange fugues” belong to his music’s formal devices. Bruno Chevillon’s detailed playing makes poetic use of light and shade and texture, befitting a player who counts Pasolini and Scelsi amongst his influences, as well as jazz’s innovators. Merville was a chamber musician firstly, touring with Boulez and the Ensemble InterContemporain in the early 90s, in parallel with improvisational activities, and sensitivity to sound and colour has long been a hallmark of his work, with partners ranging from Martial Solal to African balafon player Moussa Hema.

The Pifarély Quartet is completed by Antonin Rayon, who makes a first appearance on ECM here. Dominique enjoyed listening to Rayon in the Spring Roll band of flute player Sylvaine Hélary, and has since worked alongside him in Marc Ducret’s band. Antonin may be best known as a Hammond organist, but Pifarély puts the focus on his thoughtful and creative piano playing, always at the service of the ensemble sound.

Tracé provisoire was recorded at Studios La Buissonne in the South of France in July 2015.